When professional women get together to debate feminism today, the question on most people’s minds is probably: who are the men in the audience? And why aren’t there more younger men there, taking notes? My problem with many feminist discussions (especially in North America) was always that they tend to be somewhat of a bitch-fest in deconstructing patriarchy, while (still, unfortunately) necessary, but so not enough.

This particular group of women in their discussion (open and free to the public) at Berliner Festspiele theatre as part of the Theater Treffen 2011 festival proved that we have finally moved from deconstruction to creative and progressive construction of inspiring feminist role models.

The discussion began with a talk by the Swedish director and theatre manager Birgitta Englin, entitled, “Reappearing in the Lime Light,” about the revival of women playwrights and directors in Sweden and the necessity for building new, feminist “networks” to counter-balance “the old boys’ networks” of cultural establishments.

Thea Dorn opened with some statistics: out of 124 theatre managers in Germany 19 are women – that is (only) 15%. Furthermore, 30% of directors, and 50% of playwrights are women. She opened the panel discussion with the question: Why are there still not enough women in top positions? One argument is that women don’t have the drive of extreme ambition (and Facebook’s Sheryl Sandberg would agree) if apparently gender equality in workplace has been achieved by the previous generations.

Marlene Streeruwitz offered her view, stating that the top positions are still overseen by the “old boys’ networks” where women often go unnoticed. Even as well-rounded intellectuals, women are often passed on when it comes to questions of economy or security.

The ongoing debate about gender differences can be summed up by two camps: those who believe that all people are equal as individuals and that gender differences are propagated by patriarchal structures to reinforce hierarchies (most women at the panel seemed to adhere to this view), and those who claim that there are fundamental (biological) differences, which are merely marginalized (Karin Beier seemed to adhere to this view, believing that most men simply lack certain abilities that women have, such as multitasking, organising, child-raring).

Stefanie Lohaus responded by saying: if you have read Simone de Beauvoir’s The Second Sex (1949), you cannot be in the latter camp because gender differences are exasperated by repeating the stereotypes and clichés of biological differences. In fact, by repeating stereotypes, we perpetuate them.

Thea Dorn concluded the panel discussion with a very provocative question that left the audience contemplating the current and future state of feminism: Do women (still) have to prove that they can be as successful and ambitious as men, or do men have to learn to prioritize things like women (especially when it comes to taking care of children)?

Again Stefanie Lohaus and the others responded with inspiring ideas: what we need is to create more positive feminist role models (Vorbilder schaffen). 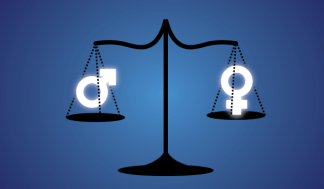 What the panel discussion did not mention is that these role models also have to be created for and in collaboration with men. It becomes increasingly apparent that the next wave or project of feminism (after deconstructing patriarchy, and after creating positive female role models, is to create positive male role models (men who are capable of being primary care-givers to children – more and more of whom can be seen in public spaces in Berlin.

Creating new “networks” and role models and paradigms that promote gender equality and make it easier for women to achieve and generate what has been traditionally reserved for men is essential; but while the ladies (and gentlemen) in charge translate and implement this into practical and everyday reality, a new, even more updated version of feminism has to be engineered in the cultural labs and think-tanks. 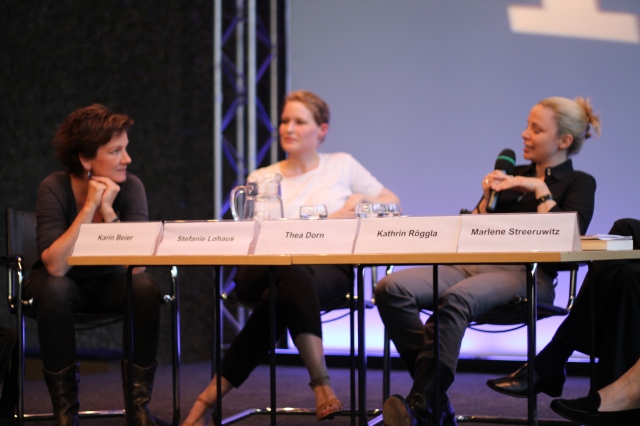 Feminism 2.3 – not only incorporating the practical applications of deconstructed (and enlightened) power relations between genders, not only providing women with functional opportunities to balance careers and families (Karin Beier sets a great, but unfortunately rare example), in fact not only establishing role models, but making equality – in a new way – a norm. The next generation (or version) of feminism has also to be about more positive, feminist role models for men. Maybe then more men will come to talks on feminism because it actually should and will concern them. Until then, we sadly remain in our own “old boys” and “old girls” clubs, with a few rare, but inspiring exceptions.

Perhaps it’s not so much about making feminism a non-word, but rather Feminism 2.3 should be re-branded as feminism for everybody (but that’s not new either – bell hooks already announced just that in 2000). So, dear feminists, let’s go back to the drawing boards and come up with it – the new reality behind the word.

This entry was posted in Berlin, Inspiration, Lectures, Theatre. Bookmark the permalink.

1 Response to Feminism – a non-word today?