Berlin Elsewhere – “This is not a piece about Berlin” 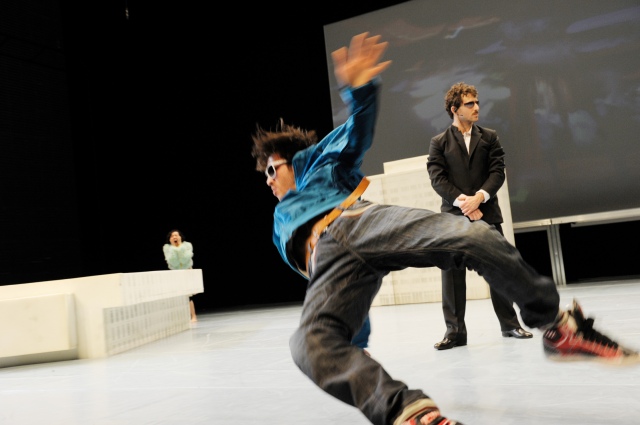 “This is not a piece about Berlin” is announced in four languages at the beginning of Berlin Elsewhere as ten people step onto the stage and begin to twirl and dance without music. One of the props – a styrofoam model of a high-rise building – collapses and the dancers begin to use it as a platform for their movements. Einstürzende Neubauten comes to mind. Two musicians on a side stage (set up with instruments) begin to play. The dancers continue to dance to the music. Their movement is that of fragmentation and interruption. They fall and get back up, only to fall again (knee pads are integrated into the costumes). True to contemporary dance vocabulary, the gracefulness of classical ballet is de-constructed and undermined with choppy, almost un-natural movements, which the dancers nonetheless execute with incredible skill, ease, and grace. Influences of gymnastics, yoga, hip hop, break-dance, and even ballroom can be deciphered. But mostly, there is a lot of falling and de-constructing (like the buildings in Berlin).

After a particularly energetic set of movements, one of the male dancers joins the musicians on the base. Only one female dancer is left on stage, continuing to dance to the music. Another female performer begins a monologue about “confinement as a social mechanism – Germania: the gated community.”

Directed and choreographed by Constanza Macras, the performance premiered at Berlin’s Schaubühne on April 13th, 2011. Funded by the Hauptstadtkulturfonds (capital culture fund) and the Regierender Bürgermeister Berlin – Senatskanzlei – Kulturelle Angelegenheiten (Mayor of Berlin, Senate Chamber of Culture), whose mandate it is to further inter-cultural integration and education in Berlin, the performance touches on the core questions of confinement within society, within movement, within a body, within a language.

One of the protagonists sings: “You don’t know what love is, until you know the meaning of the blues, until you’ve had a love you had to lose.” Love, or relationships as a place of confinement are explored in movement. Later in the performance, one of the male protagonists tells us: “Everybody has a problem with German women. For them, it’s always about politics. About sexual politics. It’s not like that where I come from.” In one sequence, one of the female characters narrates the dance movements of another female character. She calls her: “Frau Berliner Mauer” – the widow of the Berlin Wall because she believed to be married to the Wall. “Did you know your husband had two sides?”

In another sequence, the one of the female performers sings about her nostalgia for Korea and the Korean language. Geographical confinement and linguistic confinement are explored.

In Berlin Elsewhere strangers meet at a place of mental captivity. They’re suffering from common social maladies, neurosis, bipolarity, fetishism, and fetishism of commodities. A place that is somewhere between exclusion, madness, and struggle. Madness and segregation are presented as a consequence of one another and mirroring factors. Segregation is a form of madness and madness promotes segregation. What kind of Madness does our society permit before someone is confined?

There is a strong parallel in the random questions that are posed in the evaluation of a patient on the verge of being sectioned as »mad« and those posed to an immigrant applying for residency in the EU after marrying a European partner. The daily mechanisms of exclusion start in childhood and are an expression of the society we live in. The characters confine themselves in their daily acts of segregation, as one says: “You can’t just do yoga all the time, you need to greet the doorman once in a while.”

The city of Berlin is the perfect example of a “locked up” and “excluded” city, where segregation, madness, and confinement have historically played a strong role: Unemployed people from the new federal states who were unable to get a foot in the door in the years following reunification; Immigrants who studied in East Berlin and were able to live in the city legally but lost their civil rights with the fall of the Wall, were stranded without the option to return to “their” countries. Passengers par excellence, like the medieval ships of fools, whose passengers did not fit the fixed social norms and were abandoned to the endless waters. Who can tell for certain who was on board of those ships? We’re left with the uneasy presentiment that a long lost ship might one day return, or that such ships might again be created, clandestinely, and set off anew, again and again. As a consolation we will always have the BBC to show that it is much worse somewhere else. The madness can begin, in Berlin Elsewhere.

This entry was posted in Berlin, Dance, Theatre. Bookmark the permalink.