BIG Fashion at the ROM 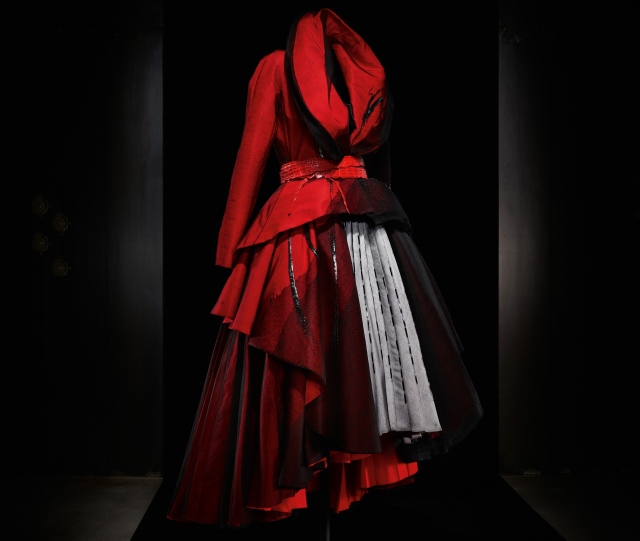 Since November 3, 2012, the Royal Ontario Museum (ROM) presents BIG, a fashion installation in the Patricia Harris Gallery of Textiles & Costume on Level 4 in the
Museum’s Michael Lee-Chin Crystal. This exhibition is exclusively drawn from the ROM’s collection of nearly 50,000 textiles and costumes. Showcasing 40 artifacts from around the world, this unique exhibition includes objects assuming their BIG status in a myriad of ways. With some objects publicly displayed for the first time, the installation offers a fresh, new way of exploring the ROM’s renowned collections. BIG continues until Fall 2013. 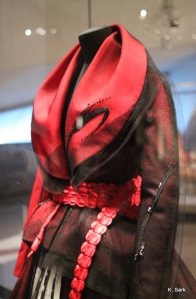 The exhibition opens with the exquisite, red “Passage #5” coat-dress and belt, from the Haute Couture Collection, Spring Summer 2011 for Dior by John Galliano. A recent acquisition, and now a highlight of the Museum’s permanent collection and this exhibition, “Passage #5”  was specially commissioned by the ROM and made possible by the generous support of the Louise Hawley Stone Charitable Trust.

BIG EVENT: Inspired by the illustrations of René Gruau, a leading graphic designer of the 1940s and 1950s, this was part of the last and most technically challenging collection by John Galliano for Christian Dior
BIG SIZE: 166.5 metres of cloth
BIG TIME: 500 hours to create by a team of ateliers including patternmakers, cutters, tailors, seamstresses, embroiders, beaders, pleaters, painters, and dyers
BIG INNOVATION: Manipulation of two dimensional watercolour rendered in three
dimensions
BIG MESSAGE: A 21st century reworking of Dior’s 1947 New Look Galliano’s anti-Semitic remarks one month after this collection was shown caused a BIG SCANDAL and the House of Dior fired him.

“This installation highlights objects that are BIG,” explained Alexandra Palmer, Fashion Costume Curator in the ROM’s World Cultures department. “BIG is not just about size. Even the smallest textile can have BIG personal, social, and cultural value that shifts according to context. BIG brilliantly looks at the meaning of textiles and fashions from around the globe and across time.”

In addition to Galliano for Dior, contemporary fashions by leading designers Martin Margiela, Alexander McQueen, Vivienne Tam, and Tom Ford for Yves St Laurent are among the other BIG names on display. Alexandra Palmer noted that, “Excitingly, a number of very recent acquisitions by BIG names are showcased in the display, including two from Toronto donors. Ms. Marlene Mock’s fascinating oversized black dress is part of a larger donation of significant fashions by Maison Martin Margiela, while Ms. Lonti Ebers’ stunning black lace dress by Alexander McQueen, a design she wore to the June 2007 Gala Opening of the ROM’s Michael Lee-Chin Crystal, is also displayed. We are most grateful to both women for their generosity.” 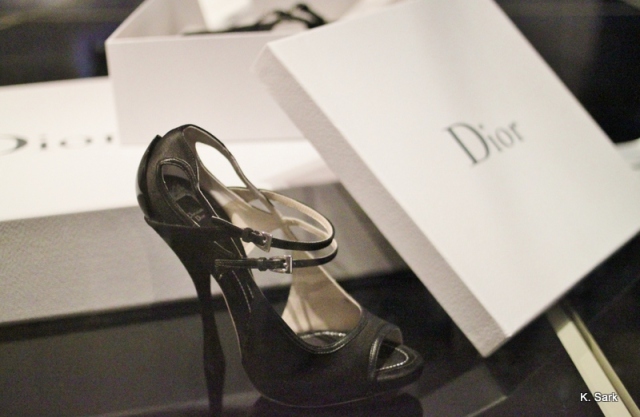 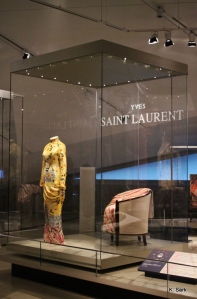 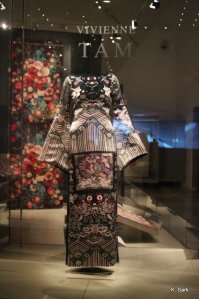 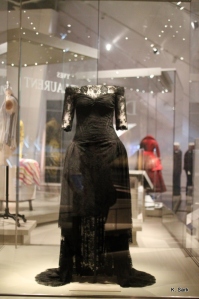 The “Water sleeve” evening gown by Vivienne Tam is from her Jade Collection from Fall 2011; it is digitally printed silk, and a gift of Vivienne Tam.
BIG INNOVATION: Digitally printed textile design is specific to this dress and size
BIG NAME: Vivienne Tam (Chinese-American) is renowned for modern designs based on Chinese imagery and traditions
BIG VALUE: One of only 17 produced
BIG MESSAGE: Retro luxury meets glamorous 21st century China chic; references historic
Chinese Imperial court robes and rank badges which clearly display a courtier’s status. 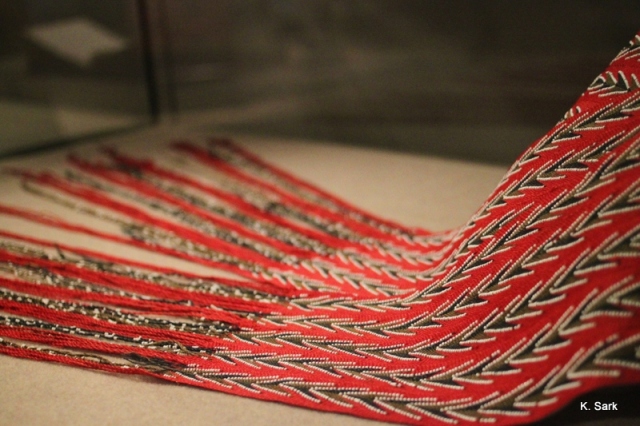 The Woman’s metal and plastic zipper vest by Maison Martin Margiela is from the Artisanal Collection Fall/Winter 2005; Paris, France, made out of cotton, metal, and nylon, and is a gift of Ms. Marlene Mock.
BIG INNOVATION: 1891 Whitcomb L. Judson invented the “clasp locker” for use in boots
BIG VALUE: Utilitarian objects and mate

Located on Level 4 of the Michael Lee-Chin Crystal, the Patricia Harris Gallery of Textiles & Costume opened to the public in April 2008 as part of the Renaissance ROM expansion project. Named in honour of Mrs. Patricia Harris, in appreciation of the ongoing generous support of Mr. William and Mrs. Patricia Harris, the Harris Gallery is one of the Museum’s most dramatic spaces with angular walls rising to approximately 13 metres. BIG occupies the entire Harris Gallery, featuring new displays in the Jennifer Ivey Bannock Exhibit; the Lynda Hamilton Exhibit; the Phyllis Hamilton Exhibit; and the Flavia Redelmeier Exhibit.

1 Response to BIG Fashion at the ROM