Gastronomika – 6th floor of the Olympic Plaza shopping centre (5 Marata st., metro Mayakovskaya or Ploshad Vosstania) Open daily 11am-11pm, on weekends till 1am. A glass elevator overlooking the old street takes you up to the 6th floor, overlooking the roofs of the neighbouring buildings. A colourfull and modern decor inside, and some of the best food in the world! As all Ginza Project restaurants, they have a kids play room. Try their Burrata cheese with strawberries appetizer and their Pavlova dessert! $30-60.

Terassa – 6th floor restaurant with large terasse behind the Kazanskiy Cathedral (3 Kazanskaya st., metro Nevsky) Open daily from 11am to the last client. Overlooking the back of the Kazansky cathedral, this spacious restaurant has one of the best terasses in town and a large selection of cuisines (Russian, Italian, Georgian, and Japanese). It is one of the Ginza Project restaurants. Try their desserts, they have a dessert counter with a great selection, but try the meringue and the home-made lemonades! $30-60.

Moskva – 6th floor of Nevsky Center (Nevsky 114, metro Ploshad Vosstania). Open daily 10am – 1am. Overlooking Moscow train station and square. They have several seating areas, including a large terrace, and a kids play room. Large menu with Russian cuisine. Try their dumplings (manty), their special summer chantrell mushroom menu, and the “oreshky” cookies with dulce de leche filling for dessert. As all the Ginza Project restaurants, they have a great selection of fresh juices, lemonades, teas, and a full bar. $30-60.

PMI Terrace – 7th floor rooftop terrace overlooking the River Moika (Moika River 7, metro Nevsky) Open daily noon – 11pm. Great 360-degree view of the river and famous landmarks. The menu is a bit limited and fancy, so this place is best for drinks or dessert. Try their “Ryazhenka” cheesecake. They also have a bar/lounge/resto downstairs. The rooftop is even open in rainy weather and are usually less crowded then. $30-60.

Bellevue Brasserie – fancy rooftop with French fine dining cuisine and 360-degree view of the city, including the Hermitage  (Moika 22, on the roof of the Kempinsky Hotel, metro Nevsky) Open daily 12pm – 1am. The menu is a bit over the top fancy but a good place for drinks or dessert. Try their L’Ermitage dessert! $30-60.

W St.Petersburg Wine Terrasse – Top of the W Hotel in St. Pete, 8th floor rooftop (Voznesensky pr. 6, metro Admiralteyskaya, near the St. Isaac’s Cathedral) Open daily noon – 2am. Great view of the Cathedral and the Hermitage. DJs spin from 9pm until closing time. They have a light snacks menu, and a full bar. Great for drinks. Try their cocktails. $30-60.

Mansarda – International cuisine (Pochtamtskaya st. 3, metro Admiralteyskaya, near the St. Isaac’s Cathedral) Open daily from noon till 1am. Great view of the Isaac’s Cathedral.Top floor of the Quattro Corti business center, in a building with a long history – 150 years ago, count Shuvalov used to live here, at the Pochtamtskiy Pereulok. This is a more formal Ginza Project restaurant, better suited for business lunches and formal dinners. Try their Chicken Kiev! $30-60.

Singer Cafe – Russian cuisine and pastries (Nevsky 28, second floor of Dom Knigi (House of Books) bookstore, overlooking the Kazan Cathedral) Open daily 9am – 11pm, but the kitchen closes earlier. Beautiful view and a large selection of pastries, teas, and other specialties. It’s the perfect place to take a break between museums, sightseeing, and shopping. Try their pelmeni and oblipiha tea.$15-30.

Katyusha – Russian cuisine (Nevsky 22/24, across the Kanasky Cathedral, metro Nevsky) Open daily noon until last guest. This basement resto looks like a traditional Russian house with authentic decor and furniture. Entering through the souvenir shop, you delve into the green, white, and burgundy rooms, where the Firebird burns on the bar stand. Try their syrniki cheese pancakes. $20-35.

Marketplace – Gourmet cafeteria (metro Nevsky 24, metro Nevsky, and at Nevsky 92, metro Mayakovskaya) This is a great quick lunch place with 8 more locations around town. Open daily 8am-5:30am (and until 1am on Mondays). Everything is made fresh from quality ingredients. Try their stir fries and the pirojki with cabbage!  $20-35.

Biblioteka – International cuisine and confectionary (Nevsky 20, metro Nevsky) 2-storey cozy  and spacious cafe, decorated with lots of books, it is located in the building of the former House of War Books.Open daily noon till 11pm. Try their stir fries, desserts, and fresh juices. $20-35. 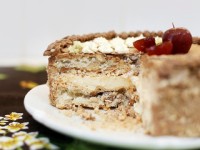 Sever – Confectionary Cafe and Shop (Nevsky 44, metro Nevsky/Gostiny Dvor) Open Mon-Fri 9am-11pm, Sat-Sun 10am-10pm. This used to be one of the main Soviet confectionary and cake manufacturer in St. Pete, and has since been revamped to become one of the largest chains of dessert shops. Sever means north.  Try their eclairs and Kiev cake! $10-20.

Pirojki stands inside the Gostiny Dvor shopping arcade (Nevsky 35, metro Nevsky/Gostiny Dvor, the food stands are on the Sadovaya side of the building) Open daily 10am-10pm. Gostiny Dvor is not only the city’s oldest department store (built in 1761), but also one of the first shopping arcades in the world. They have several pirojki (small pies) stands along the Sadovaya stretch of the arcades, with a large variety of the best pirojki in town, even made with whole-wheat dough now. Try the potato, cabbage, and mushroom ones. $3-5.

Dachniki – Soviet-style Cafe (Nevsky 20, metro Nevsky) Open daily noon till 1am. This basement cafe is designed to look like a typical Soviet dacha (summer cottage) and serves grilled meats and fish, salads, and other cottage specialties. Dachniki (summer folk) spend their summers in the country side, growing and cooking their own fruits and vegetables, making preserves, going fishing, and enjoying a leisurly summer lifestyle. Try their grilled fish. $20-45.

Kvartirka – Soviet-style Cafe (Nevsky 51, and at Malaya Sodovaya 1, metro Nevsky) Open daily noon till 1am. This basement cafe, owned by the same owners as Dachniki, is designed to look like a former Soviet apartment, with authentic furniture, decor, memorabilia, and great attention to details. For those nostalgic for Soviet aesthetics, or curious about a past era, this cafe is at two locations around Nevsky. Try their pelmeni. $15-30. 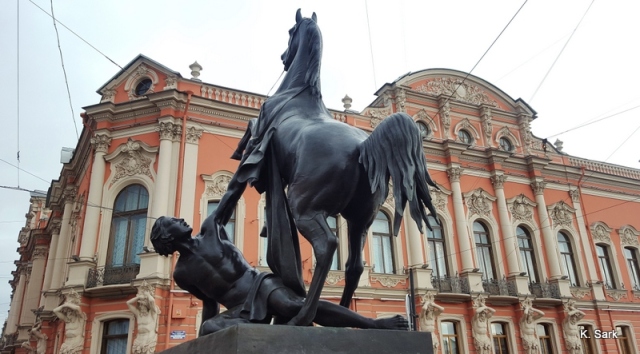 Diaghilev Cafe at the Theatre Museum – Russian food and pastries (inside the Theatre Museum and Theatre Library at Ostrovsky Square, behind Alexandrinsky Theatre). They have a simple kitchen but a very cozy cafe with art and dance books to look through while you wait. This is great for a quick snack and coffee break. There is a museum gift shop as well. Try their Diaghilev chocolate pastry. $5-15.

Jamie’s Italian – Italian cuisine of British chef Jamie Oliver (Konnushennaya Square 2, metro Nevsky) Open daily 12pm till 12am. Since 2013, run according to Jamie Oliver’s concept by the Italian chef Matteo Lai, the restaurant in located in a vintage building with high vaulted brick ceilings and arched windows. Have their own pasta machine for homemade pasta. $20-60.

Pyshechnaya – Soviet era cafe with traditional Russian doughnuts (pyshki) and coffee (Bolshaya Konushenaya 25, metro Nevsky) Open daily 9am – 8pm. Authentic Russian doughnuts since 1958 (even the staff hasn’t changed), this little cafe has not changed and serves a very limited menu of doughnuts and tea / coffee and not much else for take-out and to eat there. It has become a landmark and a tourist destination, so it is always overcrowded, so expect a 15-20min line-up. They have two cats living in the cafe and sleeping on the chairs.$5-10. 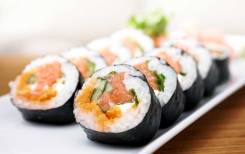 Ginger – Japanese cuisine (Kazanskaya st. 3, metro Nevsky) Open daily 12pm until last guest. Run by Tokyo’s chef Giungi Hiroyuki, who personally set up the restaurant’s kitchen and trained the team of sushi makers and compiled the menu, it is as close as you can get to Japan in St. Pete. This is a Ginza Project restaurant. Try their sushi! $30-60.

Wong Kar Wine – Asian fusion resto-bar (Fontanka 14, across from the Summer Garden and the Mahailovsky Palace) Open daily 12pm-12am. Small ground-level modern cafe, great for a quick lunch or drink.Quick and friendly service. Not very busy during the day. Try their Pad Thai and strawberry lemonade or fresh pressed juices. $15-30. 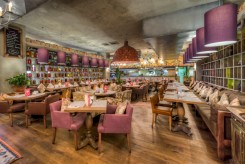 Baklazhan – Cuisine from the Caucasus (30 Ligovsky Ave. metro Ploshad Vosstania, inside Galeria Mall, 4th floor, and second location at: Polyustrovsky pr. 84a, inside Europolis Mall) Open 8am until last client. Same Georgian chef as in Korushka, Iso Dzandzava, serves eggplant (baklazhan) in all possible forms, as well as grilled kebabs, kutaby, and pies made in the tandoor oven. Try their homemade “Tarhun” lemonade. $20-35.

Alye Parusa – Russian and international cuisine (Kronverkskaya nab.3а, metro Gorkovskaya) Open daily 10am – 6am. Right across from Peter and Paul Fortress, with an open patio overlooking the river Neva, and next to the Artillery Museum, this is a great summer terrace to have a drink or lunch. Try their salads, desserts, and cocktails. $20-35.

Food Park – International cuisine and grill (Alexandrovsky Park 4/3A, on the 4th floor of the Velikan cinema and shopping mall) Open daily noon till 1am. Very spacious restaurant with various seating areas and terraces that resemble a park setting and atmosphere, with different food stations (pizza, asian, Indian, grill, etc.) and a playground with swings for kids. As all Ginza Project restaurants, this is a family friendly and trendy place, with mixed-gender bathrooms, and great views of the Alexandrovsky park. Try their sushi, salads, stone-oven pizza and desserts. $20-60.

Korushka – International cuisine and grill (in Peter and Paul Fortress, on Zayachy island) Open 12pm – 1am. Two spacious halls seating 340 persons, with a view of the Vasilevsky Island,a patio and a courtyard terrace, this resto is right next to the Petropavlovskaya Fortress, on the Neva river. Georgian chef Iso Dzandzava developed her own vision and taste of Georgian cuisine. Try their kebabs and grilled hachapuri! $30-60.

Mari-Vanna – Russian cuisine (18 Lenina st. corner Bolshoi Prospect Petrogradskoy Storony) Open 12pm-11pm. A cozy restaurant made to look like a retro Russian apartment, with black-and-white photos, a samovar, and shiny polished crystal glasses in a grandmother’s cupboard. Since 2007, its chef is Valentina Kravchenko, who treats her guests to the traditional Russian and Soviet cuisine made in her own unique way. She chose the culinary arts as her life’s profession back in 1978. $20-35.

Nasha Dacha – International cuisine (Primorskoye Highway 448, Repino, on the beach of the Finnish Gulf) Open daily noon – 11pm, on weekends until 1am. This is one of the best of the Ginza Project restaurants, decorated like a Chekhov summer cottage with wicker chairs, swings, hammocks, bike rental, a petting zoo, a kids playground with a trampoline and other fun activities. The multi-storey restaurant has its own little tower (with a romantic table for two at the very top), and several terraces with a great view of beach on the Finnish Gulf. The beach is equipped with lounge chairs, umbrellas and outdoor showers. Located just 30 min outside of St. Pete, this is a great day-trip activity that offers all-day entertainment and great food. $30-60.

Dom Knigi – House of books in the historical Singer Building (Nevsky 28, across from metro Nevsky and Griboedov Canal) Open daily 9am till 1am. This famous art nouveau building was designed at the beginning of the twentieth century by architect Pavel Syusor for Singer, the American sewing machine company.  His design created a modern 7-storey building with a graceful cupola, crowned with a glass globe; the globe measures some3 metres, and symbolized the worldwide scope of Singer’s activities.The building belonged to Singer until 1917, and thereafter was occupied by the leading publishing company and its storage facilities. At the same time Dom Knigi also opened here, becoming one of the largest commercial enterprises in the USSR. 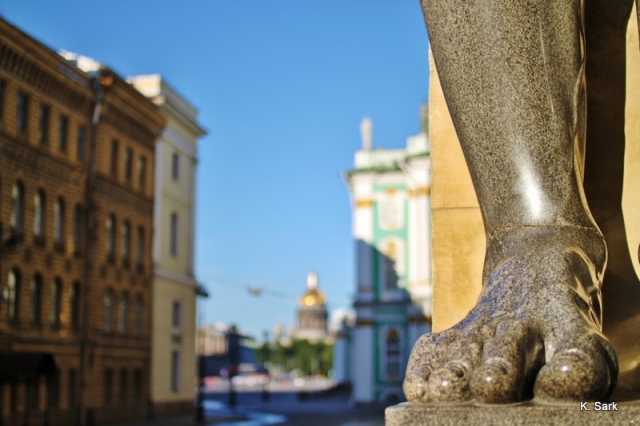 Aveda Lavanda – first and so far only Aveda salon in St. Pete (Nevsky 114-116, inside Nevsky Centre Mall 6th floor, metro Ploshad Vostania, near Moskovsky train station) Open daily 10am-11pm. One of the best Aveda hair salons and spas I’ve been to so far. $50-150.