HAM – Helsinki Art Museum (Eteläinen Rautatiekatu 8) houses a permanent Tove Jansson gallery on the second floor, which includes two of Tove Jansson’s most important works, the frescoes “Party in the City” and “Party in the countryside.” Especially the fresco “Party in the City” includes several references to Tove’s life at the time. The dark beauty on the dance floor is Tove’s then (secret) love, theatre director Vivica Bandler. In the foreground of the fresco sits Tove Jansson herself, and beside her on the table stands a little Moomin figure. The gallery also includes a changing selection of Tove’s other works.

Design Museum (Korkeavuorenkatu 23) – is a great collection of Finnish design in furniture, decorative lamps, industrial design, graphic design, fashion and jewelry from 1870 to present. The museum is almost 150 years old and is one of the oldest in the world – was first founded in 1873 but has operated in its present premises, a former school, designed by architect Gustaf Nyström in 1894 in the neo-Gothic style, since 1978. Don’t miss the Marimekko fashion collection display and the Princess Leia necklace, designed by Bjorn Weckstrom in 1977 for Carrie Fisher in Star Wars. The Design Museum is situated on the same city block is the Museum of Finnish Architecture (Kasarmikatu 24). Just a block away, you can find Tove Jansson’s studio and apartment (not open to the public) but there is a memorial plaque on the front of the building (Ullanlinnankatu 1).

Ateneum Art Museum (Kaivokatu 2) – The art museum is one of the three museums forming the Finnish National Gallery. It is located in the centre of Helsinki on the south side of Rautatientori square close to Helsinki Central railway station. It has the biggest collections of classical art in Finland. Previously the Ateneum building also housed the Finnish Academy of Fine Arts and University of Art and Design Helsinki, but has solely been a museums since 1991. Tove Jansson studied at the art school that is now known as Ateneum from 1933 to 1937. Here Tove also first met Tuulikki Pietilä, her life partner. The collections of Ateneum include extensively Finnish art all the way from 18th-century rococo portraiture to the experimental art movements of the 20th century. The collections also include some 650 international works of art. One of them is Vincent van Gogh’s Street in Auvers-sur-Oise (1890): when the painting was deposited in 1903 Ateneum became the first museum in the world to own a Vincent van Gogh. 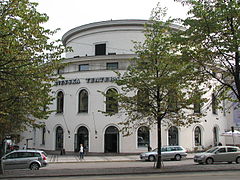 Svenska Teatern (Pohjoisesplanadi 2) – The Swedish Theatre is a Swedish-language theatre in Helsinki, located at the Erottaja square, at the end of Esplanadi. It was the first national stage of Finland. Only three years after the theatre building was completed it was destroyed in a fire in 1863. The building was soon rebuilt, in the Neoclassical style, and the theatre re-opened its doors in 1866. This time the architect was Nicholas Benois from Russia. The theatre carried the name Nya Teatern (New Theatre) until the year 1887, when a Finnish theatre was opened in Helsinki. Since 1887 the name of the theatre has been Svenska Teatern. Many pieces by Jean Sibelius had their premiere in the theatre, including the initial version of Finlandia in November 1899. Tove Jansson’s friend, theatre director Vivica Bandler had an idea for taking the Moomins into a theatre. Jansson was inspired by the idea and began working on the play based on the first three Moomin books published so far. On 29 December 1949, Tove Jansson’s Mumintrollet och kometen premiered at Svenska Teatern. Both the audience and the critics liked the play and it was presented 19 times.

Moomin Museum in Tampere (Tampere-talo, Yliopistonkatu 55) – houses Tove Jansson’s illustrations, 40 miniatures, and a small (2.5 metres high) Moomin House. There is a total of about 2,000 exhibits on display. Also shown is the original Moomin Valley multimedia. It also has the Moomin Shop which sells gift items and Moomin Library which have Moomin books in many languages. Tove Jansson and her partner, the graphic artist Tuulikki Pietilä, donated a sizeable collection of art to Tampere Art Museum in 1986. The collection comprised 1009 drawings and paintings and 38 three-dimensional tableaux. The collection was first displayed in The Moomins exhibition at Tampere Art Museum along with other original sketches and book illustrations by Jansson. Tampere Art Museum displayed the collection in a museum called Moominvalley from 1987 to 2016. Moominvalley closed in October 2016 and moved to its new permanent home at Tampere Hall in 2017, whereupon its name was officially changed to the Moomin Museum. The core of the collection consists of original illustrations by Jansson for the twelve Moomin books she wrote and illustrated between 1945 and 1977. The majority are ink drawings on paper or board, along with nearly 50 gouache and watercolour paintings, roughly a dozen scratchboards, and a few ink washes as well as pen-and-washes. Their scale is small, most being quite close in size to their final publication format.

Moominworld in Naantali (Kailo, 21100 Naantali) – a lovely theme park based on the Moomin books by Tove Jansson. It was designed by Dennis Livson, and located on the island of Kailo next to the old town of Naantali, in Southwest Finland. The blueberry-coloured Moomin House is the main attraction of the park, where guests are allowed to go to all five storeys. Hemulen’s house is located next to the Moomin House. It is also possible to go to, for example, Moominmamma’s kitchen, the fire station, Snufkin’s camp, Moominpappa’s boat. Visitors can also meet Moomin characters around the park or the Witch in her cottage. Moomin World is not a traditional amusement park, as it does not have any rides. There are many activities and fantastical paths including Toffle’s Path with the Witch’s Labyrinth, The Hattifatteners’ Cave and The Groke’s House. There are also performances in the covered outdoor Moomin theatre Emma. Moomin World is open daily from mid-June to mid-August.