Friedrich Nietzsche’s Thoughts on Becoming Who We Are

Nietzsche’s notion of “becoming who we are” is a criticism of our lack of critical engagement and self-consciousness, as well as our inability to reflect on our life as a whole. This process of becoming, as Nietzsche encourages his readers to think, is not geared towards a final destination or goal. The key of the process is the ongoing engagement, the re-examination and re-challenging of one’s beliefs, rather than a system of achieving a certain state of being. Nietzsche attacks the staleness and “sickness” that results from the lack of change, as well as the regression or corruption that comes from interrupting the process of becoming. Nietzsche saw life as a conflict of different wills, with the “will to power” as the strongest drive that dominates all our other drives. Whenever we interpret something or give it meaning, we impose our will. The process of becoming includes a conscious awareness and critical examination of our will to power. 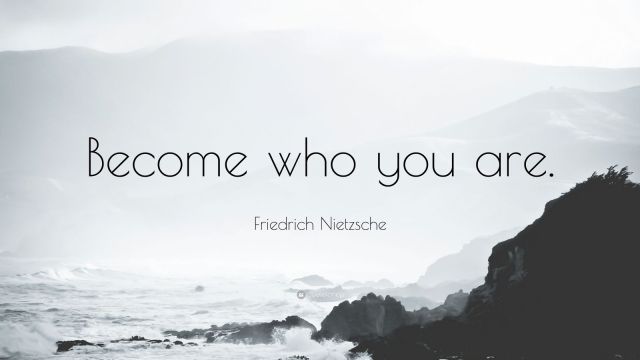 The Gay Science (1882-87) is his book of aphorism that influenced modern culture and literature. Nietzsche is particularly skeptical of language. Like Goethe’s Faust, Nietzsche is critical of the alleged power of words. Nietzsche’s critique of language is a helpful reminder for a careful reading of his texts. The Gay Science confirms Nietzsche’s thesis that “life is a means to knowledge” (aphorism 324). The word science – Wissenshaft – the crafting of knowledge, implies that knowledge is something we have to create, and not something given. As Brecht’s Galileo pointed out, “the aim of science is not to open the door to infinite wisdom, but to set a limit to infinite error.” For Nietzsche, all knowledge is the assertion of wills and everything is an interpretation. Since reality cannot be accurately represented in words, “knowledge takes place in the struggle of conflicting interpretations,” (Tongeren 168) meaning that we come to know something when we contrast our understanding (interpretation) with someone else’s. This implies a notion of relationship. Every time we interpret something, we engage in a relationship because the very act of attempting to understand and categorize things implies a dialogue, a self-conscious examination, and a critical engagement. Every interpretation is the assertion of our will and the expression of our individuality.

Because we often think in assumptions, Nietzsche challenges us to re-think what we understand as truth and as knowledge. Truthfulness – the constant striving and examination of our consciousness – is the highest quality for Nietzsche. Truth, however, is merely an interpretation or an assertion of a particular will. Truth is an absolute that is always in danger of being outdated, corrupted, or misinterpreted. As Nietzsche points out in the third essay of The Genealogy of Morals (1887), “truth requires critique,” the will to truth requires a justification. Truth essentially consists of “metaphors, illusions, [and] the obligation to lie according to a fixed convention” (Allison 78). Truthfulness, on the other hand, is connected to honesty, intellectual consciousness, and self-knowledge. “The doubt of all truth is itself an act of truthfulness” (Jaspers 82). The will to truth means that “we want to understand who we are, to correct error, to avoid deceiving ourselves, to get beyond comfortable falsehood,” (Williams xviii). Thus, our drive for truth is in constant conflict with our tendency to suppress things and create illusions for ourselves.

Nietzsche believes that error is life-preserving. There is no truth without error. Truthfulness lies in the battle between truth and error that takes place in the individual who can examine and evaluate, and never cease questioning. When we incorporate something into our understanding, we usually stop the process of questioning; we accept it as fact, as something true. In aphorism 110, Nietzsche asks, “To what extent can truth stand to be incorporated?” Nietzsche believes that “all good things come from bad things” (aphorism 2). We need to make mistakes in our lives to figure out what is true to us. Johann Wolfgang von Goethe wrote in the first part of his Faust that as long as people strive to achieve something in life, they will make mistakes (Es irrt der Mensch, so lang er strebt). In order to live, we must evaluate and learn. 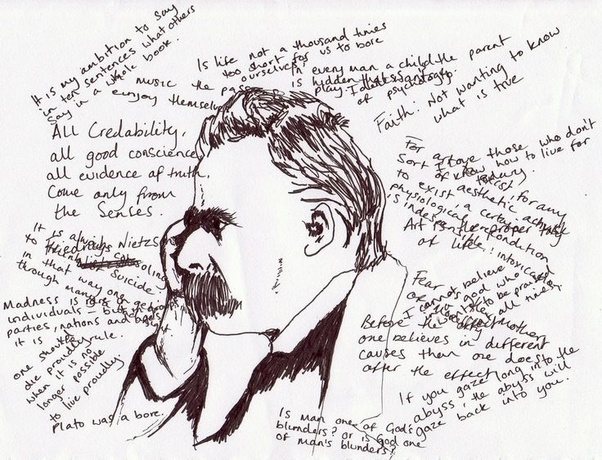 Nietzsche believed that to will is to give meaning and interpret. The function of will to power is to “turn chance into intention, create values, make things thinkable” (Stern 105). By becoming self-conscious and self-critical, we exercise our will to power and thereby have the ability to create ourselves, our lives, and our futures. Nietzsche claims that pleasure and pain are two sides of the same coin; that “whoever wants as much as possible of the one must also have as much as possible of the other” (aphorism 12). In the second aphorism of The Gay Science, Nietzsche claims that the great majority of people “lack an intellectual conscience.” They judge without engaging critically; they rely on their own assumptions and social prejudices; and they refuse to question the motives behind actions and thoughts. They live without a “desire for certainty” (aphorism 2). Nietzsche criticizes the lack of self-reflexivity with which the majority of people float through life, always escaping responsibility and hiding behind their weaknesses. In aphorism 154 Nietzsche describes such evasion of the self, stating, “You have no idea what you are experiencing; you run through life as if you were drunk and once in a while fall down a staircase.” He criticizes denial and hypocrisy.

The German concept of the Übermensch implies many more interpretations than merely “super-human.” It implies being above, beyond, over, transcending, about, and across (which is significant in Nietzsche’s bridge and crossing-over metaphor). In Thus Spoke Zarathustra (1883-85), the prophet Zarathustra claims that the Übermensch is the purpose of human existence (Gooding-Williams 65). This Nitzschean notion is echoed in Hermann Hesse’s Steppenwolf (1929), where he writes, “[human] is not by any means of fixed and enduring form… He is much more an experiment and a transition. He is nothing else than the narrow and perilous bridge between nature and spirit… [Human] is not yet a finished creation but rather a challenge of the spirit; a distant possibility dreaded as much as it is desired” (Hesse 61-62).  Zarathustra also claims that self-discovery is the most difficult journey that human beings have to take, which confirms that life is a means to knowledge. Ultimately, Zarathustra announces the possibility of self-healing, which allocates an enormous amount of empowerment to the individual. If we can utilize our will to understand ourselves and how we function, we no longer need to rely on any higher powers, deities, destiny, or luck. We become self-sufficient in the most profound sense of the word – independent, responsible, conscious. We do not need to rely on an outside power for our happiness or strength. We can be in control of our emotions, our actions, and our capabilities. But, the Übermensch is an ideal that cannot be reached. None of Zarathustra’s followers can achieve the state of the Übermensch. Human beings are bridges – our potential for both good and evil, for creation and destruction, is what makes us interesting; our ability to come to a position beyond good and evil is what makes us exceptional. 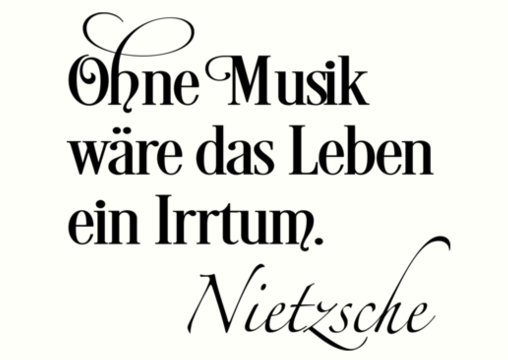 As a philosopher, Nietzsche is concerned with the creation of new values, or more precisely with the critical engagement and evaluation of present values. Bertolt Brecht wrote, “whenever there are great virtues, it’s a sure sign something’s wrong.” In his play, The Caucasian Chalk Circle (1948) he also wrote, “terrible is the temptation to be good.” Perhaps Nietzsche’s most notorious statements, “God is dead,” is from aphorism 125, in which a madman encounters people in the market and tells them that he is looking for god. The people mock him, asking “Has he been lost? Or is he hiding? Is he afraid of us?” Evidently, to the people in the marketplace god is already dead; they live in a world where god has no meaning. The madman attempts to explain to them the enormity of their nihilism, claiming, “We have killed him. We are all his murderers. How can we console ourselves?” Yet the people do not understand his accusations; they cannot understand the full weight of this responsibility. Instead, they choose a careless existence without responsibility for their actions. Our “craving for meaning and moral justification,” for affirmation and approval of our existence still has to be fulfilled even if god is dead (Allison 88), and thus we are left with the task and burden of creating a religion without a god.

The notion of knowing ourselves is perhaps the most interesting in Nietzsche’s philosophy. Only self-knowledge can unlock our power of will; only when we really know who we are, can we accomplish what we want and actually become who we are. It is a process; not a destination.  In the second part of Ecce Homo, Nietzsche claims that “my formula for the greatness of a human being is amor fati” – love of fate is the love of life. Every negative or painful experience is an opportunity to learn, to gain an insight into the human condition; a way to repeatedly come into existence and to affirm that existence. Perhaps simply understanding ourselves, the origin of our drives and desires, as well as our reactions to them, is enough to create positive change and growth.

Perhaps the persistent question whether god exists, is actually a question about who we are. The meaning of life lies in self-knowledge. James Joyce summed it up nicely in his Portrait of the Artist as a Young Man, saying, “When the soul is born in this country there are nets flung at it to hold it back from flight. You talk to me of nationality, language, religion. I shall try to fly past those nets” (Joyce 220). Nietzsche believed that only very “few are made for independence – it is a privilege of the strong” (Beyond Good and Evil, aphorism 29). The majority of people are only too happy to have others think for them, and do not at all mind living a life they did not choose. But there will always be a few for whom that is simply not enough. Nietzsche’s philosophy is a celebration of the free spirit – one who does not allow herself to be tied down to any certainties or truths, and who engages in radical skepticism to question everything. In aphorism 283 of The Gay Science, he calls this skepticism “living dangerously.” It is his way of breaking illusions by fostering self-reliance and self-assertion. In aphorism 320 of The Gay Science, Nietzsche claimed, “I want to create for myself a sun of my own.” Such a big notion of freedom and  empowerment implies enormous responsibility and expertise.

There is no philosophical system that can do justice to the world or to us; human experience is irreducible to any set of concepts. Great art and literature often reflects the ambiguity of life and invites us to explore many interpretations, each inadequate if taken by itself. Perhaps “the primary significance of Nietzsche’s teaching lies in its potential for inspiring us to value the totality of our finite lives as well as the totality of the ontological universe to which we belong” (Schutte 64). If there is one thing that Nietzsche does believe in wholeheartedly, it is “that the weight of all things must be determined anew” (aphorism 269). That is his transvaluation of all values (Umwetung aller Werte). Gilles Deleuze pointed out that “to think is to create” (Deleuze xiv). That is Nietzsche’s philosophy in a nutshell: to think and to question.

Joyce, James. A Portrait of the Artist as a Young Man. New York: Penguin Books, 1992.